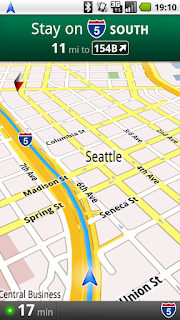 So far Google played only on the fringes of the mobile GPS Navigation market with flat Google maps for mobile, integrated with driving directions and live traffic information. But the situation is about to change with the release of Google Map Navigation (beta). This new application comes with everything you'd expect to find in a fully featured GPS navigation system: maps in 3D perspective, turn-by-turn voice guidance and automatic routing. But there is more. Google took advantage of a wide range of products it is already supplying to the public and packaged them together into a potentially very attractive product.

In particular, users will always get the latest maps and there is no need for bulky downloads since maps come directly from Google servers. The application supports simple plain English search, voice search and search for POI along the route. There is live traffic data (an indicator light in the corner of the screen alerts current traffic conditions along your route) as well as high resolution satellite imagery and street view options that show exactly what to expect at the destination.

There is an expectation that Google will release API for Map Navigation to allow developers to build myriad of customised applications and help forthcoming Android phones better compete with the Apple iPhone. Google Map Navigation if free and user only need to cover Internet connection fees to use it. For now, Google Map Navigation can only run on Android 2.0 enabled phones which are very limited in supply. In fact, there is only one handset on the market - Droid from Verizon - on sale since 6th November and only in the U.S.

Originally spotted on: Google Maps Mania
Posted by Unknown at 2:33 AM