Developers using Google Map API enjoyed integration of 3D Earth View for browsers and standard maps for quite a while – aus-emaps.com is one such site that took advantage of this integration from day one. However, users of the official Google Map site were provided with this option only yesterday. Flat “Terrain” map is still available but has been moved now to “More…” tab. 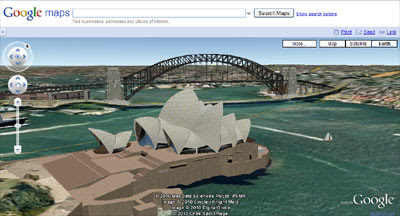 Google Earth Plugin was released to developers in 2008 yet it took 2 years to integrate with Google Map proper. It was quite a challenge to combine all the functionality consistently between different map options. Google is constantly working on adding more and more functionality. In case you did not notice, you can experiment with some additional functions by activating tools that are not yet officially released – just click on the red New! text in the top right corner of the screen to bring up a pop-up box with extras, such as “Drag 'n' Zoom” or “Aerial Imagery” which shows rotatable, high-resolution photos presenting features on the ground from four different perspectives.

I must admit that on one hand I am excited about all that new functionality and constant updates of Google Maps and API versions however, on the other hand, it all is starting to look a bit chaotic. It is quite a challenge to comprehend all available functionality options! As complexity of solutions offered by Google increases more and more users will be opting for “simpler alternatives”. This is in turn may be a great opportunity for developers to provide tailored applications.