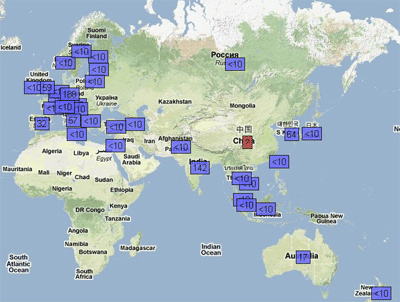 Google has just published a small map application showing world wide statistics about “Government requests directed to Google and YouTube” to remove content from services, or provide information about users of services and products. The information covers period between July 1, 2009 and December 31, 2009. You can draw your own conclusions however, general media has already started sensationalising the story with titles like: Big Brother is watching us on Google.


I would like to use this example as another proof that analysing information spatially can give additional insights into the issues under investigation. In particular, information presented as a list draws attention only to countries at the top of the list, namely Brazil, Germany, India or US. However, presenting the same information geographically can add additional perspective on the whole issue. What got my attention on this occasion was a geographic spread of countries with requests by government agencies. These are predominantly all established democracies in Europe, Americas, South East Asia and Oceania. There is a notable absence of requests form countries in the old communist block as well as the Middle East. There could be a number of reasons for this phenomenon warranting further investigation but just to provoke some thoughts, is it possible that, contrary to a popular belief, citizens in democratic societies are subject to higher level of censorship than those form more restrictive political systems?