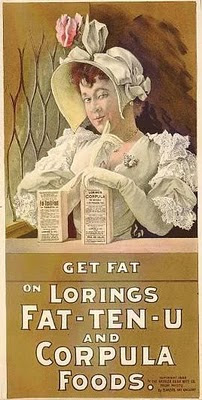 I recently bought the book Food in the United States, 1820s-1890. I came across an ad for an interesting product that was sold in the late 1800s called Fat-ten-u. Check your calendars, it's not April fools day anymore; this is for real. Fat-ten-u was a dietary supplement guaranteed to "make the thin plump and rosy with honest fleshiness of form." I found several more ads for it online, and they feature drawings of despondent, lean women and drawings of happy overweight women accompanied by enthusiastic testimonials such as this:

"FAT-TEN-U FOODS increased my weight 39 pounds, gave me new womanly vigor and developed me finely. My two sisters also use FAT-TEN-U and because of our newly found vigor we have taken up Grecian dancing and have roles in all local productions."

I'm dying to know what was in this stuff, but I can't find the ingredients anywhere.

I find this rather extraordinary, for two reasons:
A rhetorical question: did everyone count calories in the 1800s, or did their diet and lifestyle naturally promote leanness? The existence of Fat-ten-u is consistent with the idea that our bodies naturally "defended" a lean body composition more effectively in the late 1800s, when our diets were less industrialized. This is supported by the only reliable data on obesity prevalence in the 1890s I'm aware of: body height and weight measurements from over 35,000 Union civil war veterans aged 40-69 years old (1). In that group of Caucasian men, obesity was about 10% of what it is today in the same age group. Whether or not you believe that this sample was representative of the population at large, I can't imagine any demographic in the modern US with an obesity prevalence of 3 percent (certainly not 60 year old war veterans).

Here are two more ads for Fat-ten-u and "Corpula foods" for your viewing pleasure: