This geometric order follows from no end of modern studies of the statistics of market returns, which find power laws all over the place. Mandelbrot himself gave a nice exploration of self-similarity in market movements more than a decade ago in the wake of the meltdown of Long Term Capital Management, which was caused in part by an inadequate appreciation of the likelihood of sudden large fluctuations in any system with fluctuations of this sort. Now everyone knows about Black Swans and fat tails, but there may be much deeper secrets lurking in the delicate structure of market ups and downs.

That's the contention at least of Tobias Preis and colleagues in a recent paper in the Proceedings of the National Academy of Sciences. It is not by any means an easy study to digest and understand, but it seems quite important as it hints at some deep regularities in the way markets switch between upward and downward trends over a huge range of timescales from seconds up to years. Indeed, it suggests that some very fundamental collective pattern of human decision making -- as individuals sense the shifting views of others and become more likely to act in the same way -- lie behind many market rallies and crashes, regardless of the timescale on which they play out.

Briefly, what Preis and colleagues have done is to analyze several different data sets for price movements in markets on times ranging from 10 milliseconds (high frequency trading in futures markets) up to around 10 billion milliseconds, or several decades (the S&P Stock Market Index over a 40 year period). Their analysis focuses on what they refer to as "switching events" -- an upward trend which breaks off into a negative one, or vice versa. These can be identified (or defined) in a mathematically unambiguous way. Focus your microscope in on a timescale of duration Δt. The price is bouncing up and down, with p(t) giving the value versus time. The researchers then define p(t) to be ...

In other words, every interval must have both a maximum and a minimum, and these are taken as potential switching points - moments at which the market moved from a trend in one direction to another. They go on to study the volume of individual trades in the market record as you move closer to or further away from these switching points. The payoff is that they find essentially the same mathematical pattern across all time scales, even when moving between the futures market and the stock market -- in effect, a signature of switching points that shows up in the volume of trades and predicts approaching changes.

The basic pattern can be expressed in simple formulae, but the idea comes across even better in the diagram below. It shows how the volume of individual trades increases as the moment of a switching point approaches. Remember, this isn't just at one timescale, but is averaged over many timescales (this figure is for data at shorter times taken from a futures market): 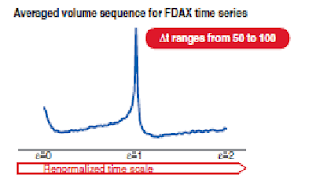 I apologize for the resolution, but you can see the basic point -- the middle of the diagram is the moment of a switching point, and the volume per trade as one approaches this point becomes very large. That is, people start trading in larger and larger amounts as you approach these points. They do so before the switch actually happens. So their behaviour is, in effect, an early warning sign of an impending switch in the trend.

This is a highly provocative finding. The paper also explores some models inspired from physics which might explain how such a universal pattern can occur. In essence, the kinds of models that work reflect the avalanche behaviour as the actions of some people feed into and influence the actions of others. On any timescale, the same kind of dynamic may be at work -- many people follow a trend for a time, then, a few become wary of a reversal and act accordingly. Others begin sensing those peoples' actions and follow suit. A growing avalanche of behaviour reverses the trend -- and simultaneously launches one off in the opposite direction.

As Preis and colleagues conclude,

In summary, we have seen that each trend—microtrend and macrotrend—in a financial market starts and ends with a unique switching process, and each extremum shares properties of macroscopic cooperative behavior. We have seen that the switching mechanism has no scale, for time scales varying over nine orders of magnitude down to the smallest possible time scale —the scale of single transactions measured in units of 10 ms. Thus, the well known catastrophic bubbles occurring on large time scales—such as the most recent financial crisis—may not be outliers but in fact single dramatic events caused by the inherent, scale-free behavior related to the formation of increasing and decreasing trends on time scales from the very large down to the very small.

We might call this Self-Similarity 2.0 for market fluctuations, certainly inspired by Mandelbrot's discoveries of 50 years ago, but also going well beyond.
Posted by Unknown at 11:52 AM