Halloween is one of my favorite days of the year & it's even better with kids. 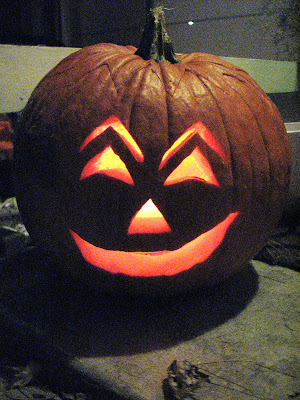 My children are now both throughly sleep-deprived & coming down off sugar highs. 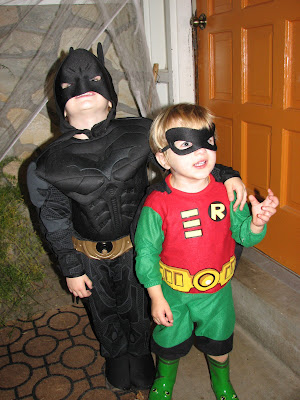 {Batman & Robin...  I swear they both have two eyes.}
They drove the Bat Mobile around the neighborhood and then we had to abandon it because getting in & out took too much time: 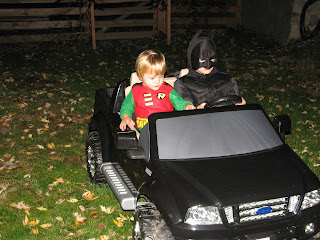 I am also sleep-deprived and have a slight stomach ache from the disgusting amount of candy I consumed.  Ah vell.
...And now onto our Baby #3 news: We're having another baby!!  He/ she's due in mid May 16th & I have about a week or so to go left of first trimester.  {anyone who has kids probably remembers being completely exhausted during her first trimester...  I literally go to sleep between 7 and 9 every night...  If I even make it that late.  -- I think my husband is actually more excited than I am for my second trimester.  He's the best.  -- 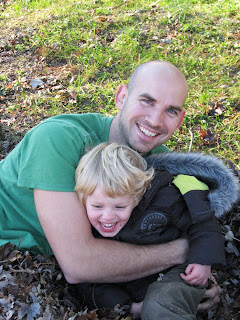 {Exhibit A}
...And if you haven't had kids, be prepared for complete & utter exhaustion.  Like falling-asleep-sitting up-tired. Add in some nausea/ dizziness & you get the idea.   But of course it's all completely worth it.}
We're so excited about the new baby, but I have to admit, with two already in the house,  I sometimes forget I'm pregnant. {until I fall asleep at 7 PM.}  I'm pretty sure it'll be another boy & would love to have 3 of what I've got, but of course I would also love to have the experience of having a girl.  So we'll see.  (we're waiting until baby comes out to find out)  I did save all of my Barbies just in case. 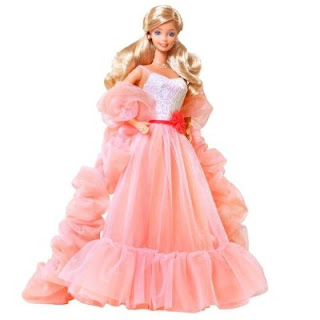 {Peaches & Cream Barbie was quite possibly THE BEST.}
So far I've had pretty great pregnancies & labors & I'm hoping for the same with #3.  It's been interesting to notice the differences in my pregnancies though.  For example, with the 3rd baby, my baby bump has popped SO MUCH sooner.  I guess the belly's just more pliable eh?  But I have to admit, I am scared of how big I might get.  I gained 60 lbs with each of my babies.  I'm already up at least 10, which is right on par.  {eeeeeeeek!}   My grandmother talks about when she had her babies, how she walked out of the hospital wearing her pre-maternity pants.  HA! If only I could!
Watching my boys develop a relationship & play together probably makes me happier than almost anything else.  I took Justin (my toddler) to Christian's (4 yrs old) preschool last week for pumpkin-carving and Christian was just so excited to show off his little brother & introduce him to all of the kids.  He held his hand and stayed with him the whole time.  Seeing them get along like that literally makes my heart melt.  (At home, half the time they're hurting each other & the other half they're laughing.)  SO, I'm really excited to bring another little one into the picture.  The boys are already talking about how they're going to take care of the "new baby."  (By "take care" I know they mean be really sweet at first and then start running him/ her over once they get used to him. ;)
Anyway, I'll keep you posted.  We don't really have any names picked out yet, but I've got ideas of a soft blue & yellow nursery. 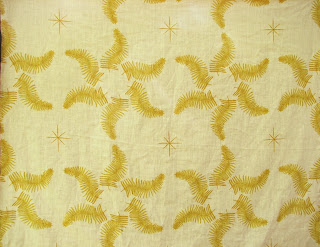 {Fern Star in Yellow, one of my newer textile designs...  I'm pretty sure it's happening in there.}

ps- On the online store/ fabric line launch front:  we are launching any day now.  My web designer just got back from vacation & I'm having her take a look at the site to make sure everything's up & running properly before we launch it.  I can't wait for you to see it!!

I've decided to keep control of the textile company myself (vs selling designs to another large company & going the royalties route) & to approach showrooms across the country about carrying my collection.   I'm in conversations with some showrooms right now, so I'll let you know if any of it works out.  Suffice it to say I'm squealing inside because I'm so excited to even be considered and insanely nervous/ anxious because of how much I admire these companies.
Posted by Unknown at 6:23 AM