The following are excerpts from respective media releases and posts on the Geoscience Australia web site:

“The new 30m DEM products improve our understanding of the national topography by producing digital elevation models at more than eighty times the resolution of the current national 9 second (250m) DEM”.

“The models were produced as part of a collaboration between Geoscience Australia, the Bureau of Meteorology (Bureau), the CSIRO and the Australian National University who have produced a number of derived products for applications such as surface water management and floodplain mapping.”

“Geoscience Australia and the Bureau are already working on phase 3 of a national scale dataset that will integrate the new DEM with regional scale (best available) topographic data. The end result will be a more accurate determination of water course activity across the country enabling communities to better prepare for water related natural hazard .”

DEM data can be downloaded for free from the National Elevation Data Framework Portal administered by Geoscience Australia (limit of 400MB per download apply). 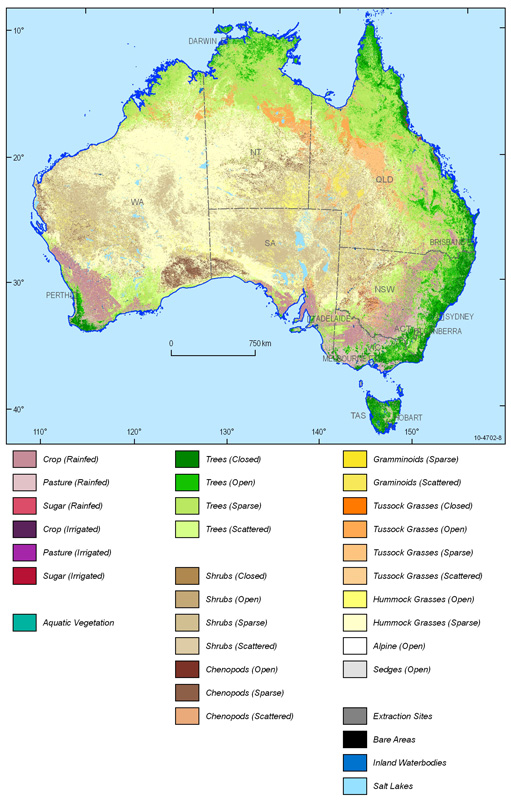 “Land cover is the observed biophysical cover on the Earth’s surface including trees, shrubs, grasses, soils, exposed rocks and water bodies, as well as anthropogenic elements such as plantations, crops and built environments.”

“Produced in partnership with the Australian Bureau of Agricultural and Resource Economics and Sciences (ABARES), the land cover map and dataset will allow users to compare vegetation over time, at a national and local level, to monitor trends associated with short term changes brought on by cyclones, long term drought and bushfires, as well as cropping and broadacre agriculture.”

“Future updated versions of the map will identify actual changes in the land cover which could provide evidence of a need for action in areas such as water management and soil erosion, or that patterns of land use are changing due to economic, climatic or other factors.”

Data can be viewed online using 3D World Wind application (relevant Java framework has to be installed on the computer in order to view the application) or can be dwonloaded free of charge in GeoTiff format (~500MB).
Posted by Unknown at 2:34 AM