My latest column in Bloomberg looks very briefly at some of the basic mathematical patterns we know about in finance. Science has a long tradition of putting data and observation first. Look very carefully at what needs to be explained -- mathematical patterns that show up consistently in the data -- and then try to build simple models able to reproduce those patterns in a natural way.

This path has great promise in economic finance, although it hasn't been pursued very far until recently. My Bloomberg column gives a sketch of what is going on, but I'd like to give a few more details here and some links.

The patterns we find in finance are statistical regularities -- broad statistical patterns which show up in all markets studied, with an impressive similarity across markets in different countries and for markets in different instruments. The first regularity is the distribution of returns over various time intervals, which has been found generically to have broad power law tails -- "fat tails" -- implying that large fluctuations up or down are much more likely than they would be if markets fluctuated in keeping with normal Gaussian statistics. Anyone who read The Black Swan knows this.

This pattern has been established in a number of studies over the past 15 years or so, mostly by physicist Eugene Stanley of Boston University and colleagues. This paper from 1999 is perhaps the most notable, as it used enormous volumes of historical data to establish the fat tailed pattern for returns over times ranging from one minute up to about 4 days. One of the most powerful things about this approach is that it doesn't begin with any far reaching assumptions about human behaviour, the structure of financial markets or anything else, but only asks -- are there patterns in the data? As the authors note:

The most challenging difficulty in the study of a financial market is that the nature of the interactions between the different elements comprising the system is unknown, as is the way in which external factors affect it. Therefore, as a starting point, one may resort to empirical studies to help uncover the regularities or “empirical laws” that may govern financial markets.

This strategy seems promising to physicists because it has worked in building theories of complex physical systems -- liquids, gases, magnets, superconductors -- for which it is also often impossible to know anything in great detail about the interactions between the molecules and atoms within. This hasn't prevented the development of powerful theories because, as it turns out, many of the precise details at the microscopic level DO NOT influence the large scale collective properties of the system. This has inspired physicists to think that the same may be true in financial markets -- at least some of the collective behaviour we see in markets, their macroscopic behaviour, may be quite insensitive to details about human decision making, market structure and so on.

The authors of this 1999 study summarized their findings as follows: 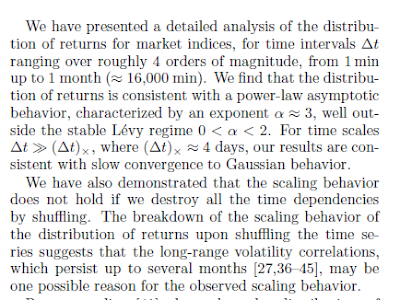 Several points of clarification. First, the result for the power law with exponent close to 3 is a result for the cumulative distribution. That is, the probability that a return will be greater than a certain value (not just equal to that value). Second, the fact that this value lies outside of the range [0,2] means that the process generating these fluctuations isn't a simple stationary random process with an identical and independent distribution for each time period. This was the idea initially proposed by Benoit Mandelbrot on the basis of the so-called Levy Stable distributions. This study and others have established that this idea can't work -- something more complicated is going on.

That complication is also referred to in the second paragraph above. If you take the data on returns at the one minute level, and randomize the order in which it appears, then you still get the same power law tails in the distribution of returns over one minute. That's the same data. But this new time series has different returns over longer times, generated by combining sequences of the one minute returns. The distribution over longer and longer times turns out to converge slowly to a Gaussian for the randomized data, meaning that the true fat tailed distribution over longer times has its origin in some rich and complex correlations in market movements at different times (which gets wiped out by the randomization). Again, we're not just dealing with a fixed probability distribution and independent changes over different intervals.

To read more about this, see this nice review by Xavier Gabaix of MIT. It covers this and many other power laws in finance and economics.

Now, the story gets even more interesting if you look past the mere distribution of returns and study the correlations between market movements at different times. Market movements are, of course, extremely hard to predict. But it is very interesting where the unpredictability comes in.

The so-called autocorrelation of the time series of market returns decays to zero after a few minutes. This is essentially a measure of how much the return now can be used to predict a return in the future. After a few minutes, there's nothing. This is the sense in which the markets are unpredictable. However, there are levels of predictability. It was discovered in the early 1990s, and has been confirmed many times since in different markets, that the time series of volatility -- the absolute value of the market return -- has long-term correlations, a kind of long-term memory. Technically, the autocorrelation of this time series only decays to zero very slowly.

This is shown below in the following figure (from a representative paper, again from the Boston University group) which shows the autocorrelation of the return time series g(t) and also of the volatility, which is the absolute value of g(t): 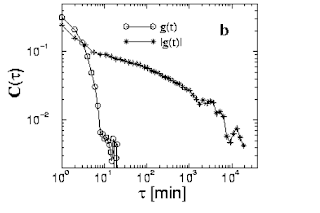 Clearly, whereas the first signal shows no correlations after about 10 minutes, the second shows correlations and predictability persisting out to times as long as 10,000 minutes, which is on the order of 10 days or so.

So, its the directionality of price movements which has very little predictability, whereas the magnitude of changes follows a process with much more interesting structure. It is in the record of this volatility that one sees potentially deep links to other physical processes, including earthquakes. A particularly interesting paper is this one, again by the Boston group, quantifying several ways in which market volatility obeys several quantitative laws known from earthquake science, especially the Omori Law describing how the probability of aftershocks decays following a main earthquake. This probability decays quite simply in proportion to 1/time since the main quake, meaning that aftershocks are most likely immediately afterward, and become progressively less likely with time. Episodes of high volatility appear to follow similar behaviour quite closely.

Perhaps even better is another study, which looks at the link to earthquakes with a somewhat tighter focus. The abstract captures the content quite well:

We analyze the memory in volatility by studying volatility return intervals, defined as the time between two consecutive fluctuations larger than a given threshold, in time periods following stock market crashes. Such an aftercrash period is characterized by the Omori law, which describes the decay in the rate of aftershocks of a given size with time t by a power law with exponent close to 1. A shock followed by such a power law decay in the rate is here called Omori process. We find self-similar features in the volatility. Specifically, within the aftercrash period there are smaller shocks that themselves constitute Omori processes on smaller scales, similar to the Omori process after the large crash. We call these smaller shocks subcrashes, which are followed by their own aftershocks. We also show that the Omori law holds not only after significant market crashes as shown by Lillo and Mantegna [Phys. Rev. E 68, 016119 2003], but also after “intermediate shocks.” ...

These are only a few of the power law type regularities now known to hold for most markets, with only very minor differences between markets. An important effort is to find ways to explain these regularities in simple and plausible market models. None of these patterns can be explained by anything in the standard economic theories of markets (the EMH etc). They can of course be reproduced by suitably generating time series using various methods, but that hardly counts as explanation -- that's just using time series generators to reproduce certain kinds of data.

The promise of finding these kinds of patterns is that they may strongly constrain the types of theories to be considered for markets, by ruling out all those which do not naturally give rise to this kind of statistical behaviour. This is where data matters most in science -- by proving that certain ideas, no matter how plausible they seem, don't work. This data has already stimulated the development of a number of different avenues for building market theories which can explain the basic statistics of markets, and in so doing go well beyond the achievements of traditional economics.

I'll have more to say on that in the near future.
Posted by Unknown at 4:36 AM