On Saturday 25th February, powered by the squidgy energy of choice Soreen, I travelled off to Stoneleigh Park for Race Retro. This is the first time I've attended this event and it's a whopper of a show. Four Halls filled with historic and classic race cars along with some motorbikes too. Along side the bustling exhibition halls there was also a classic rally stage that benefited from the great weekend weather. Here are my sketches and other highlights from the weekend. 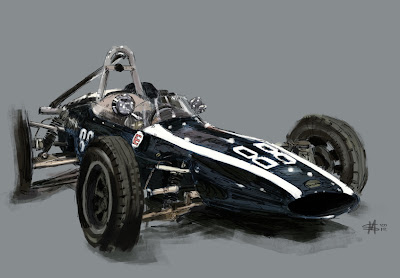 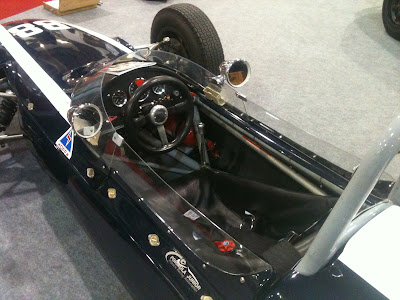 Chassis number FJ 3962 was purchased from the Works by Bill McCowan who Raced throughout '62 until crashing at Monza. The car was sufficiently damaged to end McCowans' season. Repaired and raced during 1963 by Mike Budge who painted the car Blue with a bold orange stripe. There are records of the car being subsequently owned by Messrs Nicholson and Brockhurst but the car disappears from 1967 until it is discovered during 2002, dismantled and stored in the back of a derelict van, at a garage in Sussex a stone's throw from Goodwood. The bodywork was still in the Budge colour scheme. Restored by Grant Wilson the car has been raced regularly since 2006.
This Cooper was displayed on the Hall and Hall stand, for more information please visit their website:
www.hallandhall.net 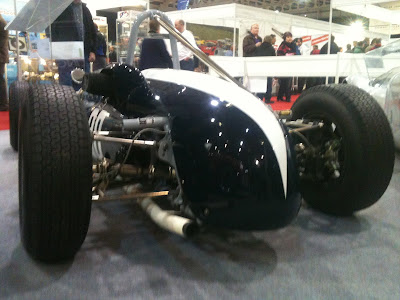 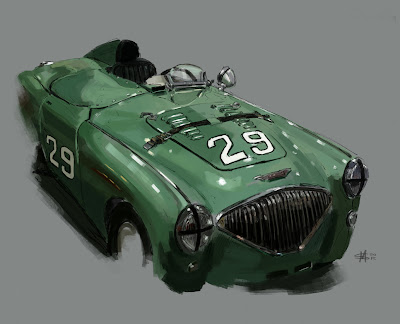 Austin Healey 100s Endurance Car
(digitally painted ink sketch)
Officially the fastest naturally-aspirated Austin Healey 100 in the world
Built in 2008 to challenge the Enudurance Record of 132mph set by Donald Healey in 1954, this car not only broke Healeys Bonneville record but also smashed 17 others, including the UK's 100 mile standing start record. Built on what is believed to be the last known factory chassis this car is rivet for rivet identical to the original car SPL337B.
This car is currently for sale through The Old Racing Car Company:
www.OldRacingCar.co.uk 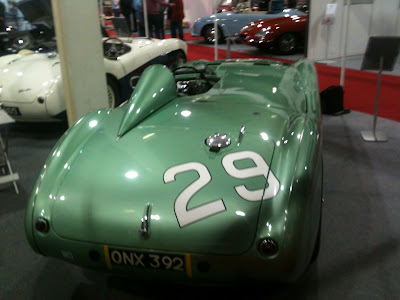 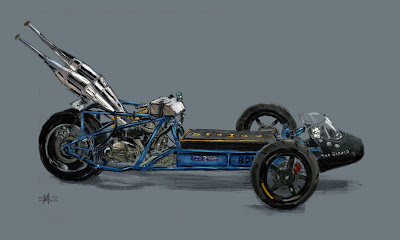 TZ 350cc Cyclecar
(digitally painted ink sketch)
Currently campaigned by Trevor Duckworth, this beutifully insane headfirst cyclecar is the holder of the British National Records for the quarter mile, kilometre and mile. Both standing start and flyers it holds these records as a 250cc/350cc and some as a 500cc. Originally built by Des Heckle with a 250cc Starmaker engine ans scooter back wheel for Irene Scargill it held all the 250cc world and national records. Trevor bought it in the late 70's and modified it to take the tz engine and racing sidecar wheel.
This bike has probably held more world and national records than any other. Trevor will be running this bike at various Straightliners events as part of the championships this year and hopefully breaking more records with it. To find out more about the Straightliners championship head over to the wesite:
www.straightliners-events.co.uk 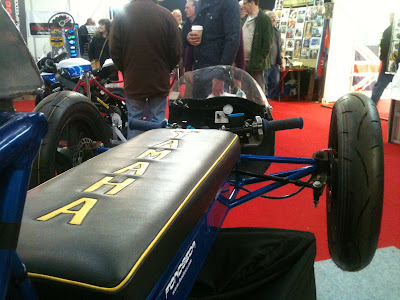 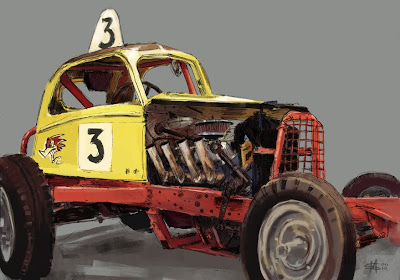 Ellis Ford #3 Replica
(digitally painted ink sketch)
The above Car is a replica of Ellis's 1965 World championship winning car. Mike Shirley also has the original engine from this car! It is built on an original LD chassis and is true to the era in which it raced. They tried to ban Ellis' cars several times - big motors, lightweight wheels, bare minimum bodies, Ellis was always tweaking the authorities. You could hear Ellis from miles away with those pom-pom exhausts - usually on booming 427 ford V8s. Mike told me that the Replica has the same V8 that they used in GT40's, I'm glad the engine is still in this fantastic stock car. 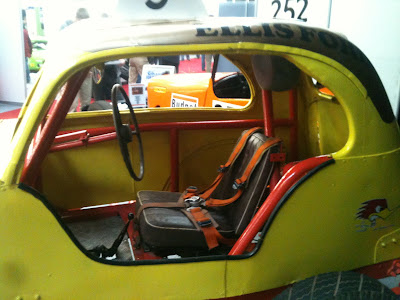 I couldn't believe my eyes when I saw these BRISCA Heritage cars tucked away in the corner. For me these were the highlight of the show. I'm always impressed by the pure fun approach of stock car racing, of course yes it is a seriously competitive sport but there is something to the bravado and ingenuity of these cars that brings a smile to my face. More info on the history and fixtures please visit the BRISCA Heritage website:
www.briscaf1heritage.com 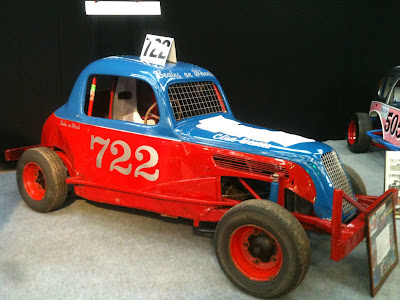 Clive Beales 722
Based on a 1949 Ford Pop and runs a 100e engine with a down draft Webber carburettor. 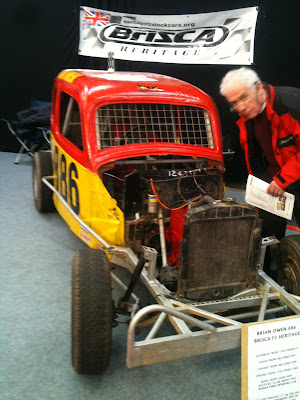 Brian Owen 886 F2
The Pop body is believed to be from the 1965 world winning car. The car finished 2nd in the 2011 shale championship and 2nd in the points at Coventry and Bradford. 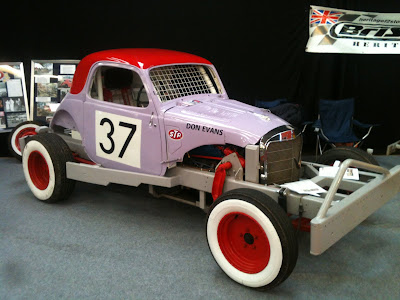 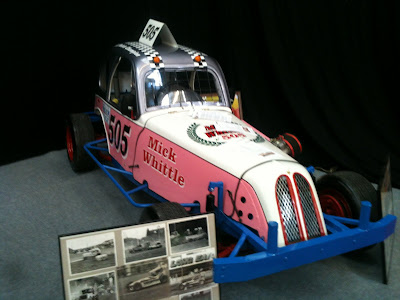 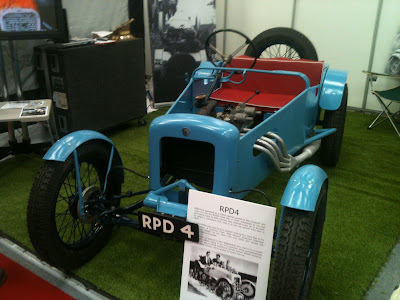 RPD 4
RPD 4 first appeared as a Cotton special owned by Rex Chappell who used it to win the BTRDA Gold Star in 1953. Impressed by the new cars being made by Mike Cannon, Rex ordered a new car to be built; he called it Cannotton and used it to win his second gold Star in 1955.
More information on the Cotton trials cars can be found on the Historic Sporting Trials Association website:
www.hsta.co.uk
Silverstone Auctions had a huge array of cars up for grabs
here's a couple that caught my eye. 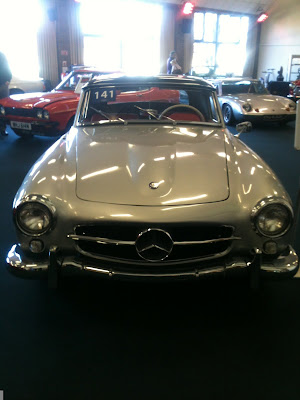 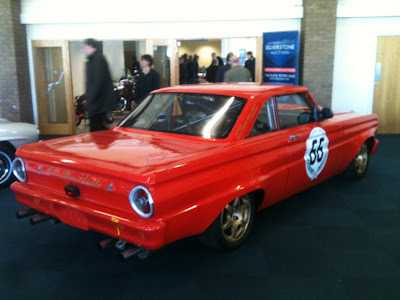 1964 Ford Falcon Sprint
The Classic Rally stage had a huge range of entries here are just a few of them. 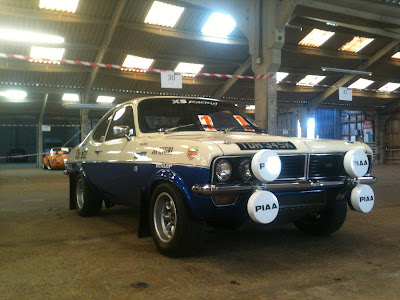 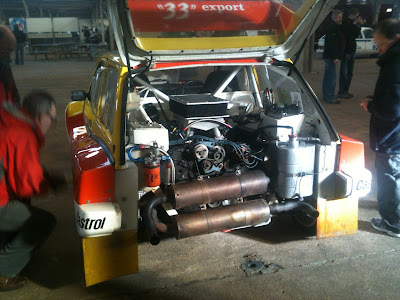 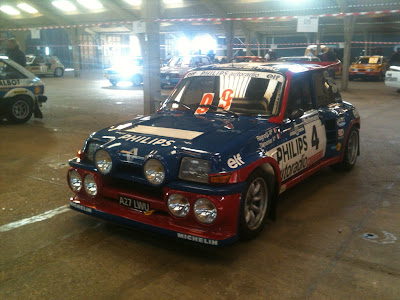 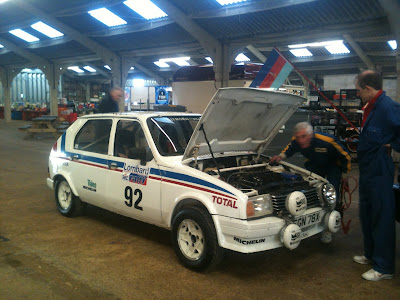 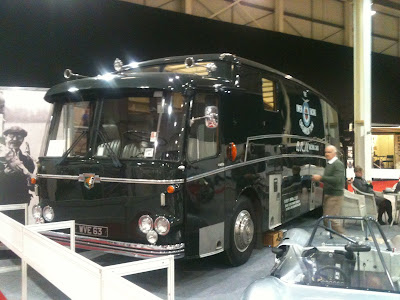 Lastly I'm always like a big truck. Based on a left hand drive export Leyland Royal Tiger Worldmaster LRT 3.1 Chassis with a 150bhp underfloor engine. This beautiful transporter was built in 1959 by Marshall Motor Bodies Ltd of Cambridge to the design of the engine development division of Rubery Owen & Co. Ltd the Builder of B.R.M. racing cars. With the capacity of 3 Racing Cars, the transporter was constructed of hardwood with exterior panels of hand beaten aluminium. 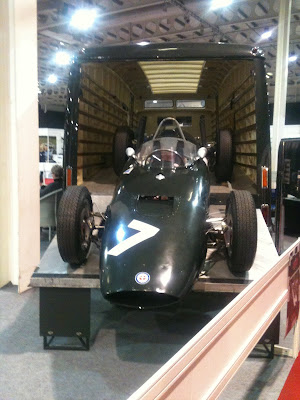 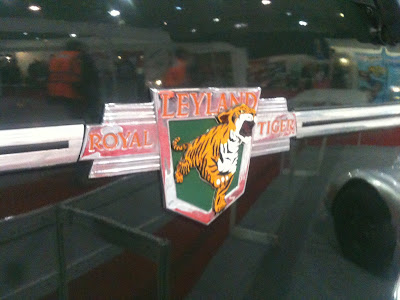 If you missed it this year I'd fully recommend attending next year as there was a lot to see and I've only covered a small section of what was on show. For more information please visit the Race Retro website:
www.raceretro.com
Posted by Unknown at 8:57 AM